Down the Rabbit Hole
This Is Running for Your Life 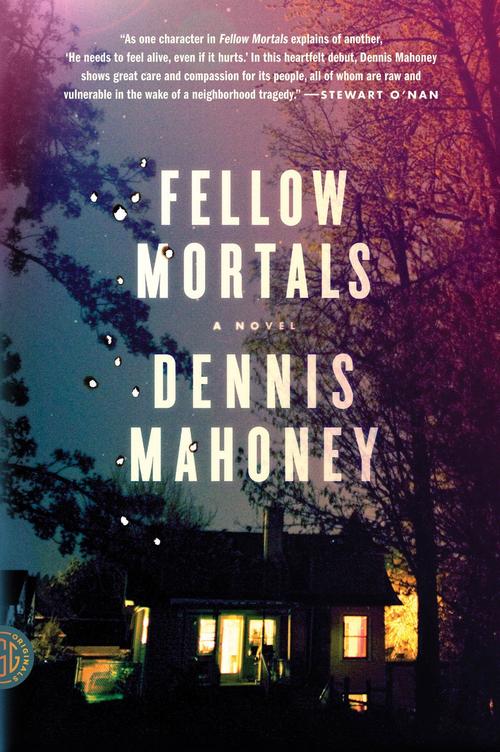 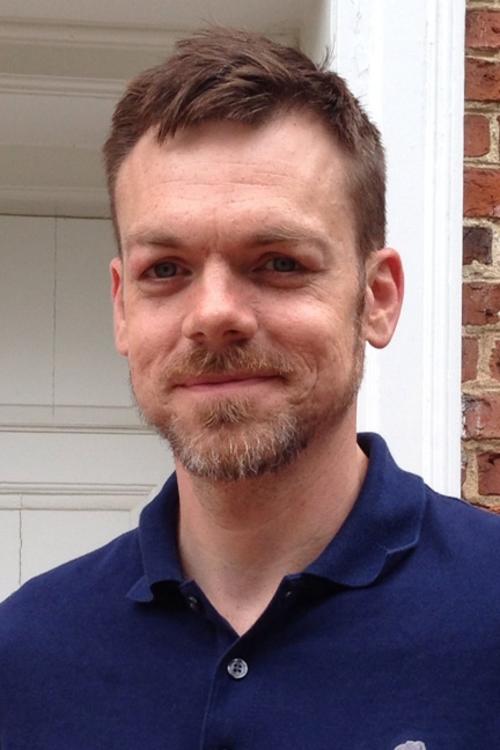 When Henry Cooper sets out on his mail route on Arcadia Street one crisp spring morning, he has no idea that his world is about to change. He is simply enjoying the sunshine as he lights up a cigar and tosses the match to the ground, entirely unaware that he has just started a fire that will destroy a neighborhood and kill a young wife.
Even though the fire has been put out, it has ignited a lurking menace in an otherwise apparently peaceful suburb. In Fellow Mortals, Dennis Mahoney depicts the fire's aftermath in the lives of its survivors. There's Henry's wife, Ava, devoted to her husband but yearning to recover a simpler time in their marriage. There's the angry neighbor, Peg, who wants Henry to pay for what he's done, no matter the cost—which ends up being grave. And then there's Sam Bailey, the sculptor who lost his wife in the fire and has retreated to the woods to carve mysterious figures out of trees. As Sam struggles to overcome his anger and loss, Henry becomes the focal point of deepening loyalties and resentments, leaving them all vulnerable to hidden dangers and reliant on the bonds that have emerged, unexpectedly, from tragedy.
With sparse and handsome prose reminiscent of Raymond Carver and early Stewart O'Nan, Mahoney's probing first novel charts the fall of a man who has spent his life working to be decent and shows us a community trying desperately to hold itself together.

An excerpt from Fellow Mortals

The fire and the mailman, story of their life. It’s all they ever talk about. He wishes it would end. But now it’s in the news again—Tonight, live at five—as if he needs to be reminded how it happened, who’s to blame.

Billy walks the lots between his place and the Carmichaels’, where demolition crews have razed the two unsalvageable homes, hauling the wreckage off in dump trucks and leaving a gap, like knocked- out teeth, in the middle of the block. He smells the fire all the time, ashy in the sun, murky in the rain, and though the ground is level and clear where the basements have been filled, he can’t take a step without discovering a piece of what was there. A curved shard of glass. A melted hairbrush. Nothing worth picking up but Billy always checks. The lawn is scorched dead along the sidewalk as if a giant magnifying glass had focused on the ground, burning two crisp holes with terrible precision. Arcadia Street has been desolately quiet ever since, and with the vacant lots affording a view of the woodland just behind the yards, the cul-de-sac feels closer to wilderness than any of the blocks between here and the center of town.

A trailer appeared today while Billy was out. Dull white and unattached to any vehicle, it’s twenty feet long and planted at the back of the Bailey property, right against the trees but glowing in the late-day sun. He had watched Sam Bailey, eerie in the half-light of dawn, enter the woods several days ago and stay there, out of sight and doing God knows what, for as long as Billy could wait before he had to go to work.

In the mornings, he’s still surprised to look outside and see the Carmichaels’ house instead of the Finns’. Just the other night he spotted Peg Carmichael in her bathroom, drying her hair like nobody could see her—fifteen minutes wearing nothing but a towel. It’s been the only real perk of a bad situation. He and Sheri draw the blinds after dark. With Nan and Joan Finn they never had to. The Finns were old, it didn’t matter, but he doesn’t need Bob Carmichael eyeballing Sheri, the way she walks around the kitchen underdressed. Or rather partway dressed, like she doesn’t want to bother, wearing a big T-shirt without pants, too long to show any thigh, or the brown bathrobe she got ten years ago from her first husband.

Not that Bob Carmichael strikes him as a peeper. He’s a good guy, Billy likes him, low-key and easy to talk to. A weird fit for Peg. Bob’s male-pattern bald and wears a lot of plaid shirts, and when he isn’t playing ball with his two sons or working at the bank, he’s usually wandering around, fixing old bikes in the yard and waving to every neighbor he sees. Peg’s the CEO and principal broker of Carmichael Realty Company and looks it: a pantsuit-wearing woman who starts her day with a six-mile run and doesn’t slow down until bedtime. She drives an Audi, whisks the kids from school to Little League and back, is rarely without her business portfolio, and treats Billy like a man who ought to be renting. He looked her up online and most of her listings weren’t that hot, only one above $300,000. Their own house is only slightly better than Billy and Sheri’s, but he guesses with the kids, the Audi, Peg’s wardrobe, and Bob’s mid-level bank job, Arcadia Street is the best that they can manage.

Peg pulls up and Billy walks over. It’s Saturday afternoon but she’s dressed like it’s early Monday morning. She hops out without acknowledging he’s there, opens the back door, and bends into the car to get a grocery bag. All her running’s paid off. He stares the whole way over, watching when her back foot hovers off the ground.

Peg shuts the door with her hip and looks him in the face. He’s had a lazy eye since birth; it doesn’t give him trouble but it’s there in conversations.

Peg groans. The Carmichaels’ southern exterior took the brunt of the damage. They had to replace the siding and four windows, and now a portion of the roof needs work, more than they anticipated. Billy’s had similar woes, except that being downwind, he lost the siding and the underlying wall, and part of his roof actually collapsed. He’s had the roof repaired and the wall rebuilt. The rest of it he plans to do himself. He had a list a mile long before the fire and can’t get ahead, but a lot of his insurance went to preexisting debts, and labor costs are ludicrous. Just ask Peg.

“We’re getting another estimate,” she says. “It never ends. Look at this place.” She scowls at the footprints of the two missing homes. “They could have at least seeded grass.”

“I guess one of us could,” Billy says.

“Do you know how expensive grass seed is?”

She looks at him and smiles, remembering he works at True Value.

“They ought to make Cooper do it,” Billy says.

“It was an accident.”

“If I accidentally hit you with my car,” Peg says, “wouldn’t you still be mad?”

Billy laughs at her aggression, grinning at her pearls and buttoned-up collar.

“The big hero,” Peg continues. “I talked to Joan Finn. She couldn’t stop praising him. He burns their house down, offers them a guest room, snap, he’s a saint. I wonder what he offered Sam Bailey.”

“He called me up and offered to lend a hand with any repairs,” Billy says. “I said thanks, we didn’t need help.”

Peg rolls her eyes and keeps them up and off Billy.

“He called me, too. My lawyer said I shouldn’t speak to him, but honestly,” she says, “I couldn’t stop myself. I mean the sheer audacity . . . as if apologizing makes it better for us!”

“Don’t even get me started. Suing a government agency’s like a suing a glacier. Even with a settlement it might take . . . what is that?”

She’s finally seen the trailer in the Baileys’ backyard.

“I guess it’s Sam’s,” Billy says. “He must be planning to rebuild.”

“I saw him in the woods the other morning.”

Billy shrugs, and that’s about all Peg can stand by the look she fires back, like it’s him who stuck a secondhand trailer in the yard.

“I’ve got to get this ice cream inside,” she announces.

He can see through the shopping bag: celery, eggplant, bottle of juice. She leaves him there without saying goodbye and he watches her up the steps and into her house, where the screen door hisses on its pressurized tubes.

Billy walks across the lot, crackling over something so charred it’s unrecognizable. TV remote? The sole of a shoe? He strolls around back and sizes up the trailer but it’s nondescript in every way; even the dents and discoloration are generic. The Baileys’ garden is still here, growing on its own, and Billy sees that the strawberry plants have already borne fruit. He checks to see if anyone’s around and picks a handful. No sense leaving them to rot. He cuts across the Finns’ and walks into his kitchen, where he puts the berries in a colander and hears Sheri coming downstairs, finally out of her nap. She works late at the diner Friday nights and sleeps past noon every Saturday, and now she shuffles into the kitchen wearing yesterday’s blouse. There’s a gravy stain right down the middle of her stomach. She hasn’t showered or brushed, her hair’s fl at on one side, and she doesn’t say “Hey” or acknowledge him at all. She finds the coffee pot empty and her face gets pissy, like every pot in America ought to be nonstop full, and then she dumps the basket into the trash, drizzling out a thin line of coffee on the floor.

“I didn’t want to wake you,” Billy says.

He grabs a sponge and cleans the coffee off the floor. Sheri stands there waiting with a filter, sighing that she can’t get around him to the counter.

“Beep,” she says, and Billy moves aside.

He sees the garbage can, coffee grounds oozing down the side, and he’s reminded of the fire-hose water and the soot. The house still stinks—smoke in the walls, in the mattress, in the ground outside, and not just wood smoke, either. Burnt tar. Melted siding. A headache stink that follows him around, in his clothing and his nose. He even smells it on Sheri.

“Yeah, the big hero. Like apologizing makes it any better.”

“If I didn’t mean to punch you in the face, wouldn’t you still be mad? He’s sitting home getting paid, for Christ’s sake. Meanwhile look at us. Look at how we’re living.”

“At least you still have a wife,” Sheri says. She won’t stop harping on the fact.

“I got you something,” Billy says, holding out the berries.

“Where’d you get those?”

“From the Baileys’ backyard.”

“Ew, creepy,” Sheri says, pushing them away, and then she goes upstairs to get dressed without remembering her coffee.

Billy starts the pot and walks out back, where he stands with the colander and tries to spot Peg through one of her brand-new windows. The berries are redder than anything he’s seen this spring, adorable and plump, like a basketful of hearts. He thinks of Henry Cooper when he pops one into his mouth, but it’s sour and he spits it out bloody on the ground.