I Think of it as a Mom-oir
Annihilation, Annotated

This conversation, between Jeff VanderMeer and his editor, Sean McDonald, originally took place in 2014.

In Jeff VanderMeer’s Annihilation, the book’s protagonist—known to readers as simply “the biologist”—prides herself on her evasiveness under interrogation:

“Tell me about your parents. What are they like?” she would ask, a classic opening gambit.

“What are your earliest memories?”

“Breakfast.” A stuffed puppy toy I still have today. Putting a magnifying glass up to an ant lion’s sinkhole. Kissing a boy and making him strip for me because I didn’t know any better. Falling into a fountain and banging my head; the result, five stitches in the emergency room and an abiding fear of drowning. In the emergency room again when Mom drank too much, followed by the relief of almost a year of sobriety.

Of all my answers, “Breakfast” annoyed her the most.

Lucky for us, Jeff is a little more cooperative than his characters when it comes to Q&A.; To celebrate the launch of Annihilation, the first book of the Southern Reach Trilogy, he’s answered some questions from his editor, Sean McDonald. We’re happy to report that not a single answer here is “Normal.” Or “Breakfast.”

Sean: The Area X scenario is a very elaborate creation—and the trilogy begins by setting up some pretty outrageous questions about what’s going on. How did you come up with the idea, and did you start with the entire setup in your head? Or was it more a make-it-up-as-I-go-along, I’m-sure-something-will-come-to-me situation?

Jeff: There’s an element of trust in the intuitive nature of the fiction process that guides me. Annihilation came from a nightmare I had of walking down endless subterranean stairs with living words on the walls. So I trusted my subconscious and didn’t think too much about a wider context until I’d finished the first draft—I had just a vague idea meant to ensure I didn’t make some massive misstep, and that was all. Afterward, I could look at what was on the page and search for patterns and information and clues to a greater context; the mind wants a story and it fills in the blanks.

Once I knew the general overarching narrative, I started revising Annihilation and some scenes changed, but I tried hard not to disturb what seemed to be working already. Images project an inner life or resonance for me, connected to the characters, and when I’ve written something that seems to have those qualities, it’s a delicate operation to make changes. I also had a very long list of what wasn’t going on. For example, if I were to write a story set on a spaceship where weird things are happening, I would not subject the reader to an ending in which you find out “Quel horreur! It is the Devil!” because “spaceship” does not go with “devil.” It just doesn’t. Like peanut butter doesn’t go with lobster.

“ANNIHILATION came from a nightmare I had of walking down endless subterranean stairs with living words on the walls.”

Sean: You have bristled at or sometimes just been baffled by some of the comparisons used to describe your work. (No names shall be named! And to the inappropriately curious and guess-prone: It’s not who you’d think. And we may well have deleted all such comparisons from the entire Internet.) So, who would you cite as your primary influences on the creation of the Southern Reach Trilogy?

Jeff: I’m not big on shorthand comparisons in fiction. One thing may not in fact be even close to another thing, no matter what superficial similarities might appear to exist. When the comparison in question, without meaning to, actually represents the antithesis of the ideas you’re expressing in a novel, then it’s a little weird to me. I understand why it’s done, but it’s, ironically enough, one of the central points of the Southern Reach series: What do you do when you run up against something that you cannot describe through comparisons to what you know, and, when you try, it sends you off in the wrong direction?

Annihilation is as influenced by the sedimentary layers of weird fiction and SF/fantasy that’ve been accumulating in my head since I was a teenager as it is by the nature poetry of Pattiann Rogers and Leena Krohn’s short novel Tainaron. Somewhere in there, the detritus from a hundred issues of Galaxy magazine is communicating with Thomas Pynchon’s V. and Deborah Levy’s Beautiful Mutants.

And then there are works like Molly Gloss’s “The Grinnell Method,” which I read well after I wrote Annihilation, but it exists in the same general vicinity as my novel, I think—this reaching for the backdrop of a more positive description of our relationship with the natural world.

Beyond that, the novels are different, so the influences are different. Authority, for instance, is deeply influenced by many things I’ve learned reading great spy fiction over the years, but also by thinking about the question of how to write a supernatural novel without a supernatural element.

Sean: This work feels, to me, like a departure from your previous novels—it is, for one, based on a distinct, real place, even if Area X is a wholly unidentified region (on, for that matter, an unidentified planet—though I think it’s Earth . . . ). What inspired that break?

Jeff: Every other novel has been set in imaginary worlds, whereas the Southern Reach Trilogy is set on Earth or some slight variation of Earth as we know it. I don’t have to worry too much when I say a character went to the grocery store that the reader is wondering what the place looks like. When you make up worlds entire, there’s more of a burden to provide additional context without slowing things down.

This isn’t to say there aren’t elements of autobiography in the earlier novels, based on my travels as a child, but I’ve lived in Florida more than twenty-five years, and it feels like home. Past day jobs that, for example, took me to every county health department in the state, certainly educated me on every nook and cranny of this place. And I’ve spent countless hours hiking in the St. Mark’s Wildlife Refuge. So, gradually, I’ve gravitated more and more to overtly Florida-like settings—although “Florida” is never mentioned specifically in the books, giving me the distance I need to write. Still, the firsthand knowledge of the setting allows me to relax into the writing in a way that’s different from previous novels. Of course, whenever anyone thinks of Florida they think of Miami and South Florida, which is completely different from where I’ve lived.

The other break is that I’m now much more interested in effects where the machinery of the effect is invisible to the reader and the experience is wholly immersive. This kind of goes hand in hand with writing more about a real-world setting, because when you’re writing about imaginary worlds you’re already in some sense creating a greater barrier to disbelief. No matter what you do, the very setting is saying, much more loudly, “I’m not real. I was never real and yet you love me and want to visit me. Ha, ha, ha.”

Sean: Not just the protagonist but all the major characters in Annihilation are women. How did that decision happen, and did it end up posing any special challenges for you? Was it hard/tricky/interesting/no big thing to switch to the male protagonist (with mommy issues) of Authority?

Jeff: It might be disingenuous to try to separate out that decision about Annihilation as a conscious thing—it existed so early on and came so naturally. Once I was writing the women, though, it was refreshing that the facts and texture of the story required that I not use their names or physical descriptions, that I let them be defined by their dialogue and actions and thoughts. This felt less like making them anonymous than focusing on the essentials of their personalities, while also allowing the natural world to encroach around them in a more claustrophobic way.

I wouldn’t say it was difficult to switch to a male protagonist in Authority, especially since there are two strong female characters who figure prominently in the text as well. It was more that I was slipping from one kind of novel to another. Authority has more outward trappings of certain types of thrillers; it’s a bit of a mimic in that regard: meant to provide a recognizable structure that serves as a delivery system for something surprising.

Sean: You wrote this trilogy from beginning to end in a full-immersion, turn-off-the-internet-and-write marathon. Was that unusual for you, or do you usually write in a fit of possession?

Jeff: Some novels have been fitful, start-stop creatures, with long stretches of inactivity. Others have been whirlwind immersions. But either way, what I do need while working on any rough draft are periods of no Internet access, or else I get too fragmented. You know—like they used to do it in the olden days . . .

Probably the most important things I learned were about sequencing, layering, and dialogue. It all more or less came out of one question while I was starting to write Authority: What is interesting to the reader about the Southern Reach secret agency and about Area X, and what is not? This led to a whole bunch of questions, and as I tackled them, the novel devoured itself—scenes I thought I needed were eaten by other scenes, creating better pacing, etc. Then the initial question dropped away and I started thinking about the limits of what you can drop into a scene, the limits of what you can do with bits of dialogue. And by limits, I mean the limits of what still remains more or less invisible to the reader.

Sean: You sold the movie rights early on (to Scott Rudin and Paramount). Did that affect the writing of the trilogy at all? More important, have you cast it all in your head? Even more important, did you write in a cameo for yourself? Your wife? Your editor?

Jeff: Oddly, the movie deal came at just the right moment, with Annihilation squared away and Authority in the works. If I were writing the movie version of Annihilation, I’d sequence the script differently than the novel. But Authority was always going to have these moments that I thought of as cinematic and a structure that I thought of as more closely aligned with film—probably because for Authority I studied movies such as Stanley Kubrick’s The Shining frame by frame to see how he got certain effects. So the movie deal just energized me when thinking about Authority, and by the time Acceptance came around I was over it enough that it had no impact one way or the other.

To be honest, I haven’t given much thought to casting, except that I love what Brit Marling (Another Earth, Sound of My Voice, and The East) and Regina King of Southland fame bring to acting. I’d love to see them in any movies.

I think the mysterious janitor role might work for my editor, or the head of the Southern Reach’s props department, if he doesn’t want to play the diabolical Voice . . . I asked my wife, Ann, what role she wanted, and she gave me a strange look that I still haven’t been able to interpret. 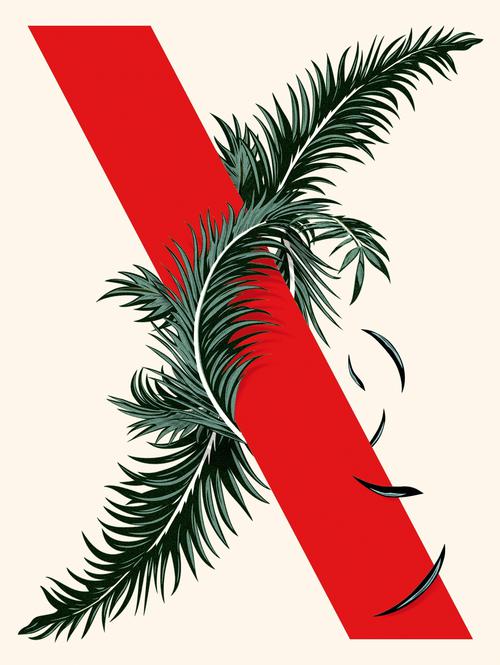 In time for the holidays, a single-volume hardcover edition that brings together the three volumes of the Southern Reach Trilogy, which were originally published as paperback originals in February, May, and September 2014.

Annihilation is the first volume in Jeff VanderMeer's Southern Reach trilogy, Authority is the second, and Acceptance is the third.
Area X-a remote and lush terrain-has been cut off from the rest of the continent for decades. Nature has reclaimed the last vestiges of human...