Black Box
Kafka on the Border

Show posters were a vital part of late-20th century punk rock culture. Before websites, Bandcamp, or Soundcloud, flyers did more than announce a show; they acted as a flag for all a band stood for and a signal to what they aspired to be. They also contributed to the emergence of the DIY design aesthetic and subculture. As an approach, DIY utilizes collage, hand lettering, stencil, silkscreen, and offset printing. The effect is decidedly unpolished and improvisational, and defined by its departure from traditional design approaches. Most importantly, it can be Xeroxed easily.

In Jeff Jackson’s new novel, Destroy All Monsters, posters feature prominently. Cover designer Thomas Colligan created four posters inspired by the fictional bands and venues in the novel; viewed together, they capture the novel’s atmosphere, which seethes with all the anxiety, anger, creativity, and joy of punk rock. 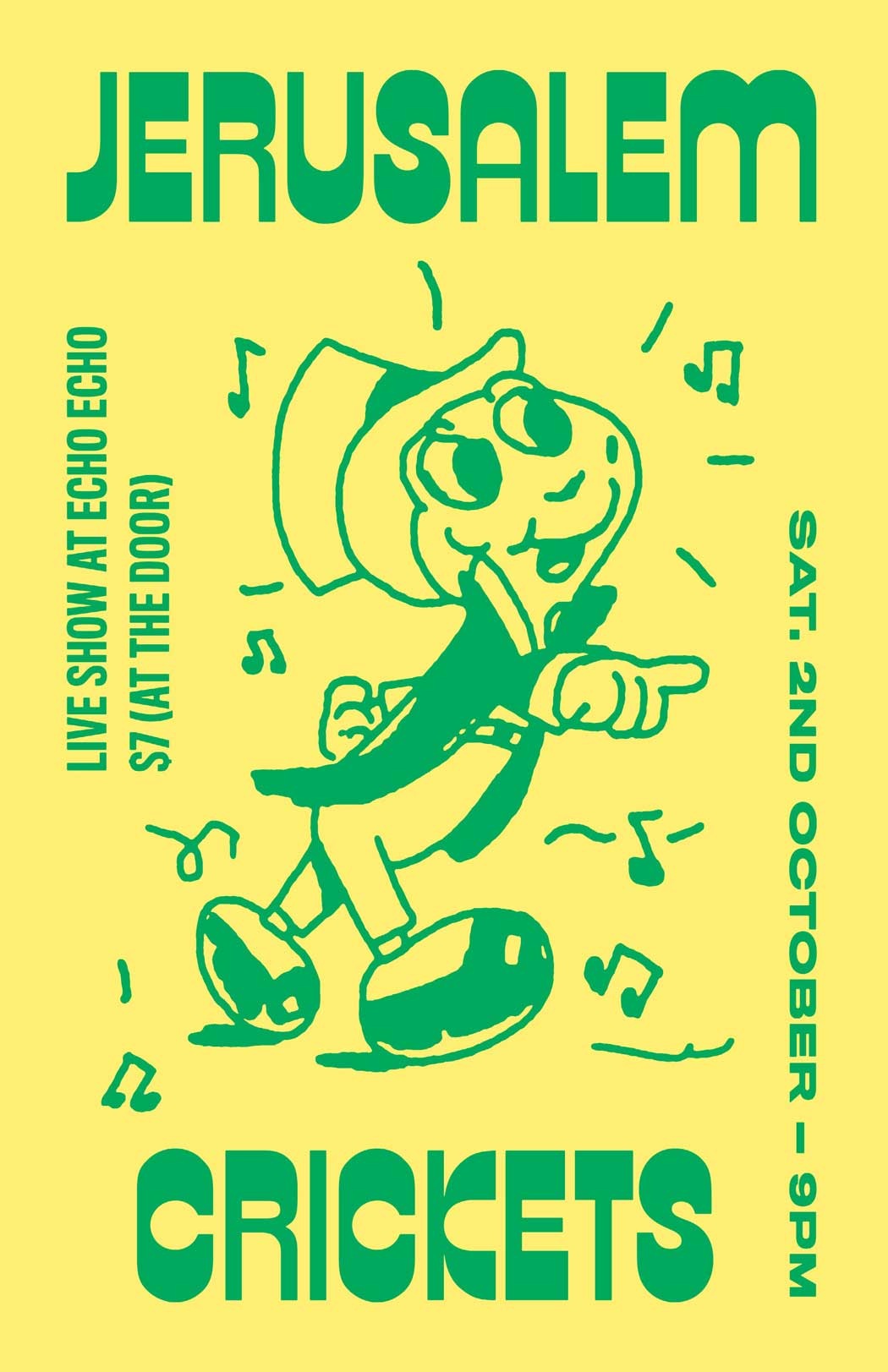 Something about the poster bothers you. It’s one of a series taped up along the mirrored panel of the back wall, part of the club’s makeshift calendar, announcing an upcoming concert. This full-color flyer features the preening portrait of some established musician. As you run your hands along your freshly shaved head, you keep coming back to the musician’s faraway gaze, his forged half smile, his brooding aura of manufactured mystery. You’re so repelled that you can’t look away. Without thinking, you swipe a pen from the bar and start to scrawl on his smug face. You scrub over the features with frenzied black lines, the tip of your pen pressing so hard that it breaks clean through the paper. 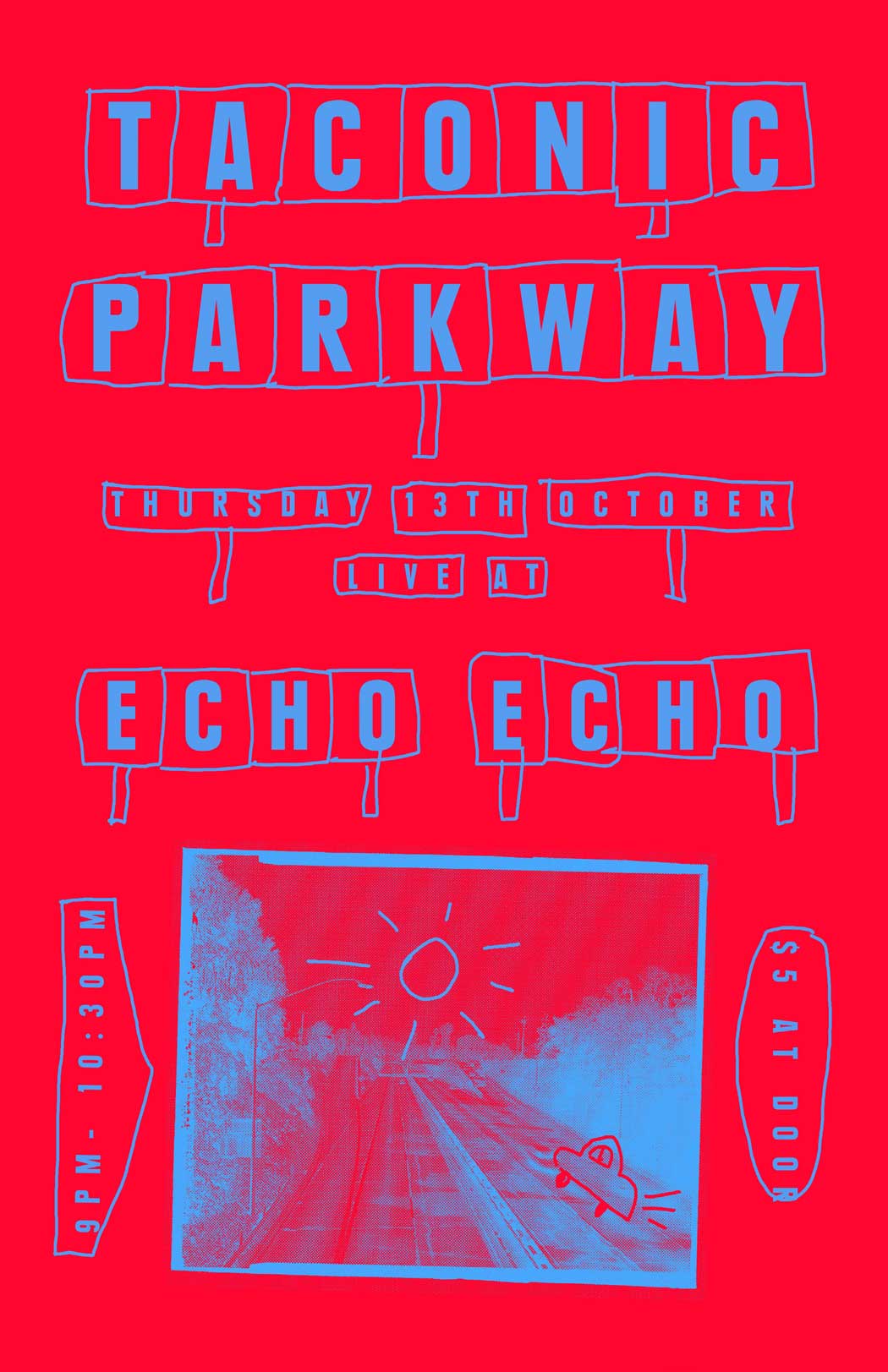 The band’s set seems to last weeks. You’re one of a dozen people crammed into the swampy basement, perfumed by the acrid smell of laundry detergent and sweaty feet, listening to the group stumble through another meandering tune. You feel trapped and try to escape by sinking deeper into the faded floral pattern of hte mildewed sofa. You know most of the musicians who are standing only a few feet away. Their preening expressions remind you of the poster in the club, and you wish you could scribble over and obliterate their smug faces. Everyone else here seems to wish the performance was over as well. They fidget and scratch, shut their eyes, shuffle their feet. As the band launches into another fumbling jam, a redheaded boy walks over the wall. You watch how he calmly unplugs the various cords connected to the amps, his hands disconnecting them one by one, until the electrified noise evaporates from the room. Even the drummer stops playing, his sticks held aloft, midbeat. It’s a revelation—the ease with which the music is expunged. You want to applaud, but the silence feels to precious. nstead, you stare down at your hands. 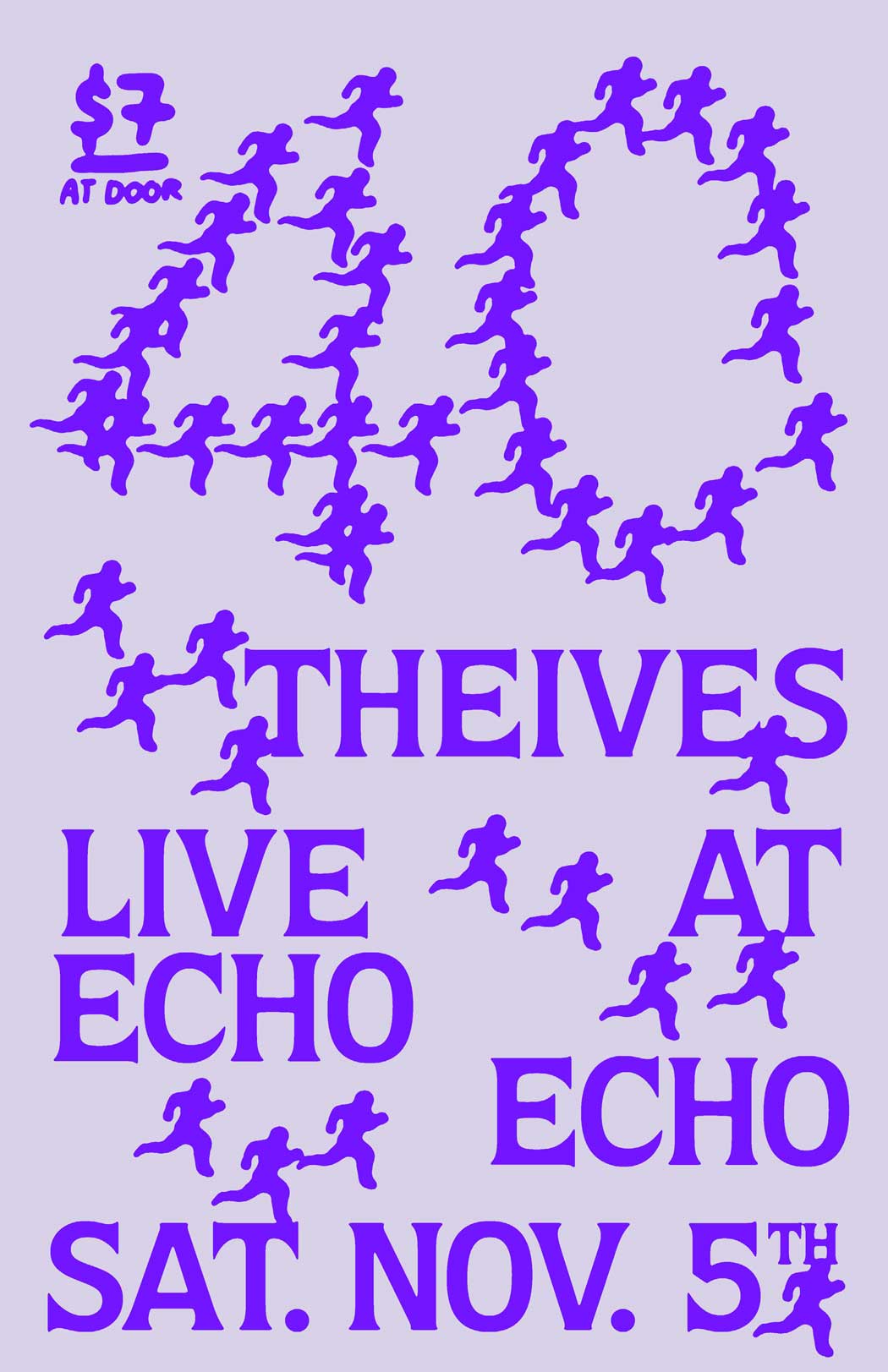 You’re not sure what you’re doing at the concert. You barely remember driving here and now you’re standing in the middle of the crowd, watching an unfamiliar band perform. Their music is deafeningly loud but it feels inert, a gauzy hive of sounds that’s not unlike the noise in your head. It makes you feel queasy. The audience around you also seems half-dazed, listlessly watching the musicians move between their effects pedals. People keep bumping into you as they cut a path toward the bathrooms. Nobody apologizes. You look around the cramped club, not recognizing the fishing nets dangling from the ceiling, the ship’s wheel tacked above the door, the flag with the skull and crossbones draped behind the band. Behind you, the translucent shelves of the bar are lit from below, suffusing the rows of liquor bottles with a murky glow. You decide you need a drink, then discover you’re already holding a beer. The band lets the song slowly wind down, leaving the singer alone to croon the final ethereal phrases. She thanks the crowd, kissing her fingertips and planting the kiss on the tip of the microphone. The audience wakes up and starts to offer their applause. This is your cue to reach under your shirt and grab the cold metal tucked in the small of your back. But instead you find yourself sitting alone in the parking lot, sobbing in the front seat of your car, staring at your hands where a bright gun barrel shines with your tears. 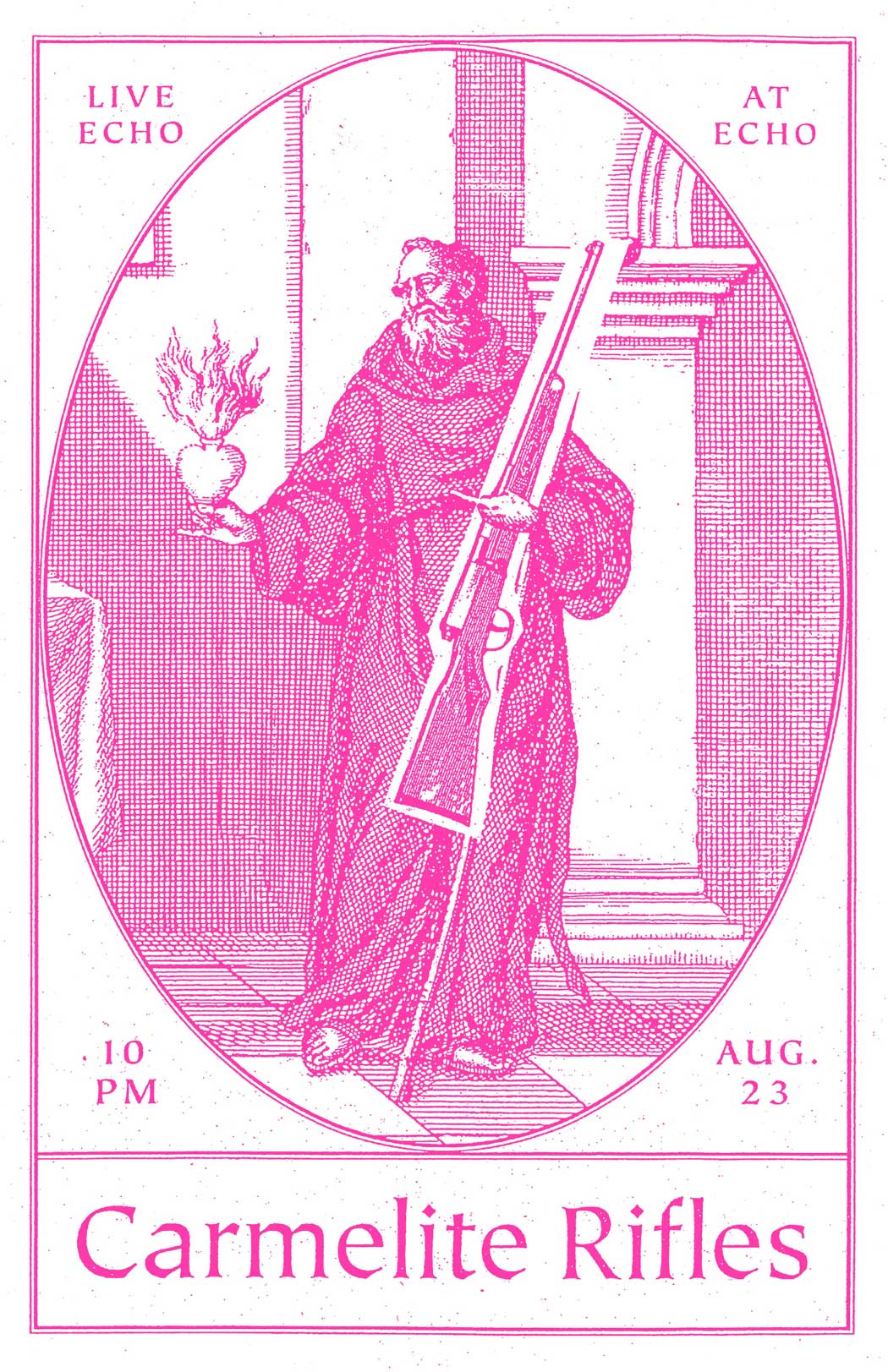 In recent years, DIY and punk rock posters have been collected into an array of art books — check out Oh So Pretty: Punk in Print by Toby Mott; Fucked Up and Photocopied by Bryan Ray Turcotte and Christopher T. Miller; and The Art of Punk by Alex Ogg and Russ Bestley. To view one of the nation’s largest collections, check out Cornell University’s punk flyer archive. 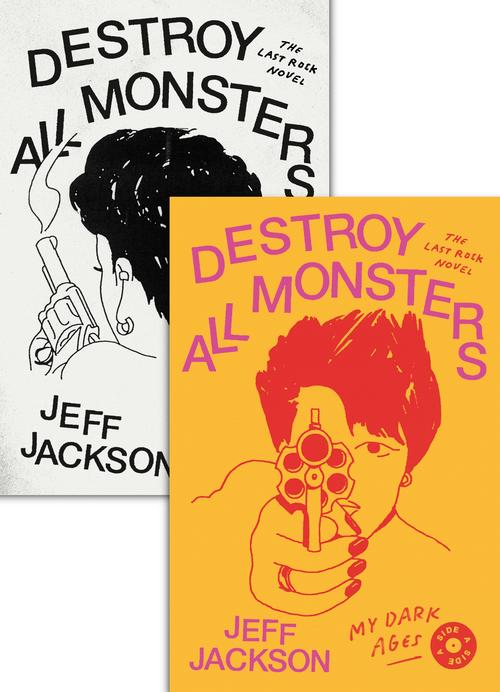 "A wild roar of a novel . . . Writing about music is tricky. Ninety-nine percent of the time hearing the actual song or going to the actual concert is far more revealing than any paragraph describing it. But Jackson pulls off this near-impossible feat, pulling the reader past the velvet ropes into the black-box theaters and sweaty, sticky-floored stadiums." —Marisha Pessl, The New York Times Book Review

An epidemic of violence is sweeping the country: musicians are being murdered onstage in...