Today, April 16, marks the beloved, late singer Selena’s 51st birthday. The Queen of Tejano music, Selena was, and remains, one of the most infuential musicians of all time, and a cultural touchstone for Mexican and Mexican-American people around the globe. Her tragic death at 23 years old, at the hands of her friend and former manager, shocked the world, and continues to reverberate to this day.

Last year, the poet Melissa Lozada-Oliva published her celebrated verse novel Dreaming of You (Astra House), which follows a poet who resurrects Selena from the dead. And yesterday, MCD’s very own Fernando A. Flores published a new short story, “Nothing Takes the Place of You,” which follows Selena as she attempts to parse the mysterious abandonment of the world (Fernando’s story appears in our forthcoming sci-fi anthology Terraform, published in collaboration with Vice’s Terraform site).

Given that it’s Selena’s birthday, we figured we’d ask our two favorite Selena-from-the-dead storytellers to discuss craft, memory, and what they love most about Selena.

Fernando A. Flores: I’m wondering if you’re interested in sharing your earliest memories of Selena. Were you aware of her music first, or her image and story? Or are they inseparable? I grew up on the South Texas border, and rode a bus that blared Tejano music during my school years. Her death had been announced when I got out of school that day, and all the kids were devastated in that bus ride home. Even the bus driver was crying as the tributes played on the radio, with people calling in live, declaring what Selena meant to them. But, I have to admit, I didn’t know who Selena really was that day.

Melissa Lozada-Oliva: Hello FERNANDO. I’m so excited that we get to talk to each other back and forth about Selenas. Okay, so my earliest memory of Selena was my older sister’s 13th birthday party. She wanted to take her and a few friends to see the Selena movie and then afterwards my parents cut a cake for her in the duplex we used to live in. What I remember the most was these teenage girls fighting over this purple icing rose that was on top of the cake, and how my sister obviously won the rose because it was her birthday. I feel like this really encapsulates my whole thing about Selena: she had already passed, everybody was fresh off seeing the story of her life as portrayed by J.Lo, I actually wasn’t allowed to see it because I was too young, and I don’t know, something about girlhood and getting or not getting what you feel you deserve. I love that the bus driver was also crying and that you learning who she was came with collective mourning. Reading your story, I’m seeing themes of escape & movement, which is something I kinda also explored in Dreaming of You. What about Selena and your memories/feelings about her, makes you want to write about that? FAF: That image of your sister’s party sums up a lot of my experience, too, actually. I have two younger sisters, and both of them got hardcore into Selena after her tragic murder. I’ve always felt that Selena’s story has never really been told, though, that the narrative of her life has always been controlled by other parties with their own separate interests, which is why I had no problem writing about her.

I wrote this story February 2021, during the days Austin, TX, was covered in snow, and people were still discussing the Selena series rampantly, for better or worse—so I got to revisit my own feelings, too, especially in this seclusion. I also knew your book was coming out, and I really wanted to get these feelings out, before experiencing your novel in verse. Somehow this “last person on earth” narrative came out of it. One of the things that fascinated me about Dreaming of You was how you approached Selena through the supernatural. Finally, I thought, somebody not claiming to be telling the definitive story about Selena, but allowing her presence to take shape in literature. I’m wondering if you feel, in a way, haunted by Selena? And, if so, did that change before and after Dreaming of You came out? MLO: It does feel like Selena is this vessel for other artists or her family members, like she lets us say things that we’ve been meaning to say about our own cultural/geographical backgrounds and our interior, but also she doesn’t exactly let us because she can’t say anything to us because she’s dead. I think I did feel haunted by Selena for a long time, in that I kept wanting to write poems about her in the same way I would about an ex or some strange childhood memory. It’s also hard not to add some kind of scary element to any writing about Selena, considering her tragic death. There’s this dramatic irony in any writing about her; the reader knows she is dead, and they are holding that fact in their heads as they are reading it.

After DOU came out, I did feel less haunted by her, or rather, at peace with everything that I had always been trying to say. I think it would be wrong to write the history of her life, but because she’s become this cultural symbol, in the same way La Virgen (or somebody like that) is, we can, as you said, have her take shape in literature in the same way the Greeks did with their gods. I love that in your story Selena is this last person on earth but also, forgive me if I’m wrong, in this afterlife that takes place in San Antonio. It’s scary, it’s lonely, it’s beautiful because you’re tapping into this curious girlhood of her as she’s figuring out what exactly is going on. Did you feel drawn to writing about Selena’s girlhood/womanhood, perhaps in relation to how many memories she brings up of your sisters? FAF: That’s very profound to hear that, how you felt less haunted, or at peace, with Selena after Dreaming of You came out. I don’t think I had an agenda when I wrote this story, I just really wanted to also make amends with Selena, the cultural figure I grew up with. I’d written stories with other real people before, like Lee Harvey Oswald, who is also a figure that sort of haunts the landscape here in Texas, and I remember after writing that story I thought, Great, I never have to think about Lee Harvey Oswald ever again. I don’t know if I necessarily felt that way after writing “Nothing Takes the Place of You,” but I definitely felt that I had some kind of connection that finally worked. Now I never have to write about Selena again, and there’s something sort of comforting about that, too, like a different kind of mourning, of letting go. Do you think you could write about Selena again? Or do you think she’ll keep popping up in some kind of way, maybe if only one of her songs or something?

MLO: I feel the same way, about making amends. Like we owe it to her almost? Persona stuff is tricky because then people kind of associate you with that forever, sending you memes and songs and articles and the like. And it’s like, I’ve already seen this! Or I know! Chill, dude! I do OTHER THINGS!! But at that point also it’s like oh, you were thinking of me, I was alive for you while I wasn’t there & I love you. I’m gonna be honest, I don’t think I ever want to write about Selena again unless it’s some kind of movie adaptation of Dreaming of You. But one time, when I was first writing this book, I was at this coffee shop in Bushwick called Molasses. It was really hot and I had just made myself really hungry from chugging iced coffee on an empty stomach. I had come to close with my writing, in that, much like it feels the way I’m writing a novel now, I confused myself with all of the twists and turns of the story and needed to just take a break. When I left, unlocking my bike from the book store’s front gate, I saw a sticker of Selena on the rusted pole, hands in the air, staring at me, like, hello. I hope the next time she pops up, it’s a little like that. Buy a copy of Dreaming of You here, and pre-order Valleyesque, out May 4, here! 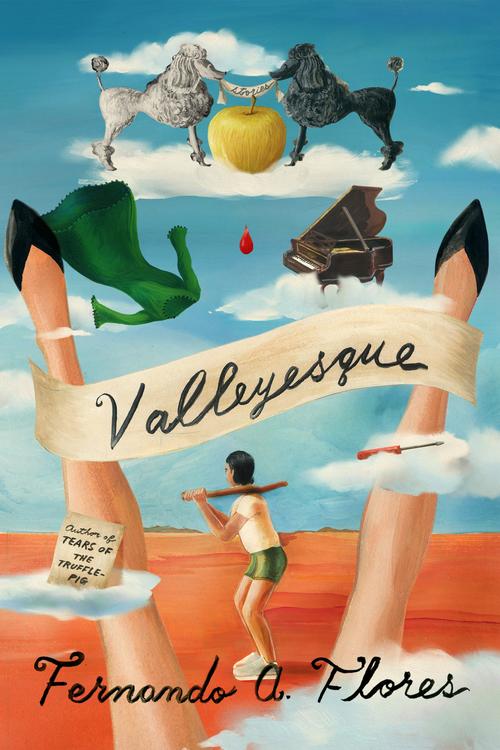 One of The Millions's Most Anticipated Books of 2022

"These are marvelously unpredictable stories, anchored by Fernando A. Flores’s deadpan prose and his surefooted navigation of those overlapping territories, the real and the fantastic, where so much of the best contemporary fiction now lives." —Kelly Link, author of Get in Trouble

Psychedelic, dazzling stories set in the cracks of the Texas-Mexico borderland, from an iconoclastic storyteller and the author of Tears of the Trufflepig.