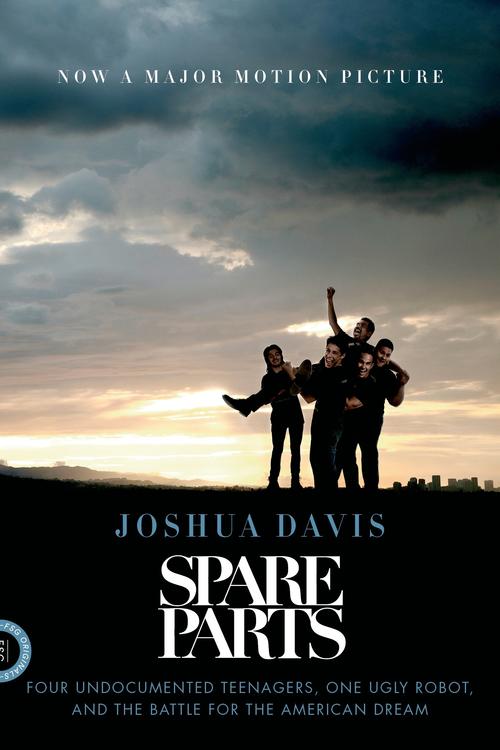 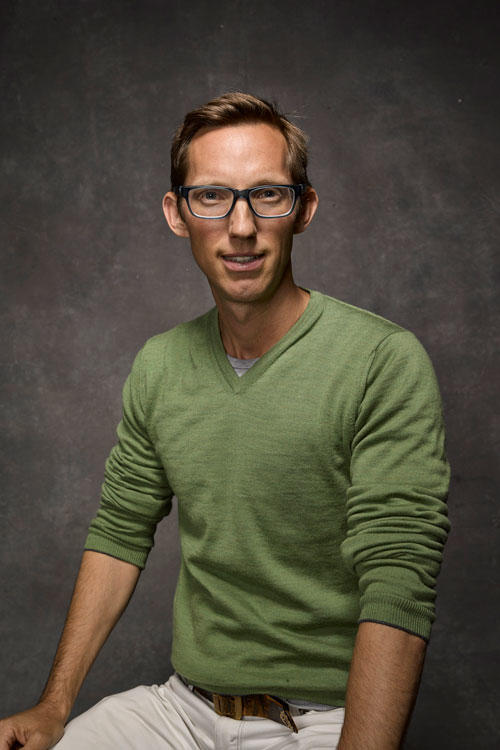 In 2004, four Latino teenagers arrived at the Marine Advanced Technology Education Robotics Competition at the University of California, Santa Barbara. They were born in Mexico but raised in Phoenix, Arizona, where they attended an underfunded public high school. No one had ever suggested to Oscar, Cristian, Luis, or Lorenzo that they might amount to much—but two inspiring science teachers had convinced these impoverished, undocumented kids from the desert who had never even seen the ocean that they should try to build an underwater robot.

And build a robot they did. Their robot wasn't pretty, especially compared to those of the competition. They were going up against some of the best collegiate engineers in the country, including a team from MIT backed by a $10,000 grant from ExxonMobil. The Phoenix teenagers had scraped together less than $1,000 and built their robot out of scavenged parts. This was never a level competition—and yet, against all odds . . . they won!


But this is just the beginning for these four, whose story—which became a key inspiration to the DREAMers movement—will go on to include first-generation college graduations, deportation, bean-picking in Mexico, and service in Afghanistan.

Joshua Davis's Spare Parts is a story about overcoming insurmountable odds and four young men who proved they were among the most patriotic and talented Americans in this country—even as the country tried to kick them out.

An excerpt from Spare Parts

Lorenzo Santillan had always been different. It might have been his head. When he was a few months old, his mother dropped him on a curb in Zitácuaro, a town of about 100,000 people in the Mexican state of Michoacán. He already had an odd, pear-shaped head, but now he developed a lump on his forehead. Laura Alicia Santillan was worried. She decided that he needed better medical attention than he was getting in Mexico, so she began the long journey to the United States, eventually slinking through a tunnel under the border with Lorenzo in 1988. Lorenzo was nine months old. She was motivated by a simple desire.

She found a doctor in Phoenix who agreed to examine her son. The man said that surgery could realign Lorenzo’s skull, but with a significant risk of brain damage. But, as far as the doctor could tell, Lorenzo was doing fine. The surgery would be strictly cosmetic and was otherwise unnecessary. Laura took another look at the bump above her son’s right eyebrow and saw it in a new light. From that moment on, she told Lorenzo that the bump meant he was smart. “Your extra brains are in there,” she told her son.

Now that Laura and Lorenzo were in the United States, there were reasons to stay. Th e family had barely been getting by in Mexico. After slicing off half of his right index finger in a carpentry accident, Pablo Santillan, Lorenzo’s father, fed the family by disappearing into the forest for days on end with an ancient musket. He would return with skunks, squirrels, and iguanas slung over his shoulder. Laura dumped them into a stew, added some tomato, chili, and onion, and called it dinner. She was only fourteen when she married Pablo (he was twenty), and neither had made it past sixth grade. There weren’t a lot of opportunities in Zitácuaro, but in the United States, Pablo had a shot at making five dollars an hour as a gardener. It seemed worth relocating.

The family moved into a two-room apartment near downtown Phoenix. A block away, prostitutes offered their services from an abandoned building. Drug dealers worked the corners. It was starkly different from Zitácuaro, where Pablo could search the forest for food. Now they lived in the middle of a big city and it wasn’t possible to hunt for dinner. Laura got intermittent work as a hotel maid, and Pablo worked landscaping jobs throughout the scorching Arizona summer.

For Laura, Mexico soon became “an erased memory.” But Pablo never forgot the solitude of the Mexican forest. A quiet, stoic man, he wore cowboy boots and sported a handlebar mustache so thick, it hid his mouth. He had the hard-drinking, solitary nature of a cowboy but now found himself in a vast urban desert with five children. It was a heavy load to bear. At night and on weekends, he oft en bought a twelve-pack of Milwaukee’s Best and started working his way through it. As Lorenzo tells it, when Pablo was drunk, he became emotional. Sometimes he told Lorenzo that he loved him, other times he snapped. On one occasion, when Lorenzo was in middle school, Pablo asked his son to clean up the living room. When Lorenzo refused, Pablo grabbed an electrical extension cord and went after him.

School wasn’t much better. As Lorenzo got older, his jowls bulged out but the top of his head stayed comparatively narrow, giving it an egg shape. Kids mocked him for his misshapen head and, once he got to middle school, they laughed at his unibrow. “I didn’t understand why people would do that,” Lorenzo says. Many days, he came home crying. With little choice, Lorenzo decided to embrace the fact that he was different. While the other kids at school had short hair and nice fades, Lorenzo went the other way. His mother cut his hair—they couldn’t afford a barber—so he asked her to only trim his bangs and let the rest of his hair grow out. Soon, he had a mullet.

His classmates were less supportive; the ridicule was frequent and varied. Sometimes they called him an egghead; other times, he was referred to as El Buki, after a long-haired Mexican pop singer. When students called him a woman, he fired back that he was more of a man because he could take all the insults. “I don’t want to be like everyone else!” he yelled back, and tried to pretend it didn’t hurt.

In seventh grade, a friend asked him to carry marijuana for Sur Trece, a local gang associated with the Crips. He agreed and was entrusted with a pound of weed, which he stashed in his backpack. Eventually, he was instructed to leave it in a hole on school grounds. He did as he was told but was terrified the whole time. “I could get my ass kicked at any moment,” he kept thinking. He realized he wasn’t cut out to be a criminal and refused to do it again.

Instead, when he arrived as a freshman at Carl Hayden Community High School, he decided to join the marching band. To prepare him, his mother found a piano program offered by the Salvation Army and managed to get a free upright piano (though it was missing a number of keys). She set it up on the back patio so he could practice. Lorenzo learned how to play pieces by Debussy (“Clair de lune”), Erik Satie (Gymnopédie no. 3), and Chopin (Sonata no. 2). Lorenzo could listen to the music a few times and then play it back. He figured he was learning enough that he could wing it at band practice.

Unfortunately, band practice is not a place where winging it works. The first problem was that the band had no piano. The closest thing the music teacher could come up with was the xylophone. Next, Lorenzo had no idea what to play since he couldn’t read the sheet music.

Nonetheless, as Christmas neared, the teacher handed him a uniform and hat and told him to get ready for the annual holiday parade. Lorenzo dutifully donned the outfit, strapped the hulking xylophone to his body, and marched alongside the rest of the band as they paraded down Central Avenue in downtown Phoenix. He knew the songs they were performing had big parts for the xylophone, but he couldn’t play them. Every now and then he would try to hit a few notes, but they were always wrong. As the parade streamed endlessly through downtown Phoenix, he kept wondering when the humiliation would be over. The best he could do was keep his legs in time with the others as they walked.

He returned the xylophone and never went back to band. He felt that he didn’t belong anywhere, though he was desperate to find friends, or at least people who wouldn’t mock him. But it was high school and he looked funny. He had also been held back a year in first grade when he was still learning English. As a result, he was a year older than his classmates, which suggested he had flunked a grade.

Lorenzo tried to reason with his hecklers. When he mispronounced a word in English and kids laughed, he pleaded for some sympathy: “Why you gotta make fun of me for something I meant?” That only produced more laughter.

Lorenzo’s anger mounted and he started picking fights at school. He ended up bruised, scraped, and in the principal’s office. He was on track to be expelled. In an effort to turn him around, the school counselor assigned him to anger-management class. He learned that his anger was explosive, the most dangerous type. If he didn’t rein it in, he would self-destruct. The counselor showed him how to calm himself by counting backward from ten. Th e problem was, he wasn’t sure he wanted to calm himself. It was hard to ignore all the teasing.

After school, Lorenzo started helping his godfather fix cars. Hugo Ceballos lived with the Santillan family and had set up an informal business in their driveway; anybody with car problems could pull in and Hugo would pop the hood, figure out what was wrong, and fix it right there.

Hugo wouldn’t let Lorenzo do much more than clean the tools with a rag damp with gasoline. It gave Lorenzo an excuse to stand beside the cars and watch. He learned that when you jack up a car, you should position a tire on the ground beside you when you slide under the vehicle. That way, if the jack fails, the car will land on the tire, not you.

Lorenzo wanted to do more, but Hugo didn’t let him. So Lorenzo hovered on the periphery, cleaning the occasional tool and watching closely as Jose, his older brother, helped. Hugo explained to Jose that it was important to keep track of all your parts. “Anything you take off a car, remember where it goes,” he told Lorenzo’s brother. When Hugo installed a rebuilt engine, Lorenzo stood a few feet back and listened as Hugo showed Jose how to use a torque wrench to tighten the bolts. Lorenzo listened carefully and tried to get as close as he could to the car. He had to be careful though; if he got in Hugo’s or Jose’s way, he’d get yelled at and told to go inside.

The chief lesson Lorenzo learned was that it was important to be creative. Hugo wasn’t running a normal mechanic’s shop, with a wall full of tools and shelves filled with supplies. He had little money, a small set of hand tools, and his ingenuity. To survive, he had to come up with fresh ideas and adapt.

Lorenzo took that to heart. He didn’t fit into white American culture and couldn’t find his place in the immigrant community. Even band—the standard home for high school misfits—didn’t work for him. But his days looking over Hugo’s shoulder in the driveway had taught him to think outside the norm. In the driveway, an unusual idea wasn’t necessarily bad. In fact, it might be the only solution.