Too Much and Not the Mood 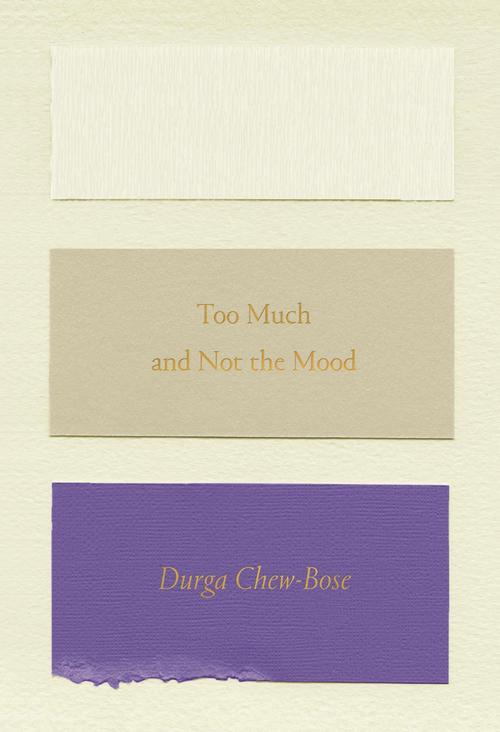 On April 11, 1931, Virginia Woolf ended her entry in A Writer’s Diary with the words “too much and not the mood.” She was describing how tired she was of correcting her own writing, of the “cramming in and the cutting out” to please other readers, wondering if she had anything at all that was truly worth saying.

The character of that sentiment, the attitude of it, inspired Durga Chew-Bose to write and collect her own work. The result is a lyrical and piercingly insightful collection of essays and her own brand of essay-meets-prose poetry about identity and culture. Inspired by Maggie Nelson’s Bluets, Lydia Davis’s short prose, and Vivian Gornick’s exploration of interior life, Chew-Bose captures the inner restlessness that keeps her always on the brink of creative expression.

Too Much and Not the Mood is a beautiful and surprising exploration of what it means to be a first-generation, creative young woman working today.

An excerpt from Too Much and Not the Mood

Pronounced miz, as in Ms. magazine. Uh as in an expression of hesitation. And rull, as in rhymes with dull. In my family, when someone is miserable, we say miz-uh-rull. We say it like this because, as a kid, I couldn’t pronounce the word miserable. The B sound eluded me. I couldn’t push beyond that second syllable and form the last two: the ruh. The bull. It was as if I was encumbered by the word’s very meaning; too dejected to complete it. miz-uh-rull, it turns out, was my very own, self-styled onomatopoeia. What ever inextricable despair I was experiencing at the age of three, it outdid me. Some babies, once born, remain unready. Despite our smallness we are in possession of a lair of apprehension, chambered in order to lodge how estranged we feel when someone, say, tosses us a ball. Or expects from us pure jubilation the first time we encounter a Slinky. As a child, a Slinky stalled on a flight of steps caused me acute stress. The way it would cede to its coils—sometimes pause and appear to levitate— and then fail, abandoning all momentum. I couldn’t cope with the suspense. In photographs, my little hands are holding each other tight, or gripped around my wrists like clamps. Concern, far beyond my scope, was compacted into me.

There’s something about a distraught child that is instantly significant. She gets it: the world is often ten seconds away from tasting like cold french fries. The world can assert itself like a category-3 shitstorm of major letdowns, and minor ones too, which I’ve learned are harder to make peace with because they are somehow inexpressible. Averting one’s attention; reacting unreasonably with no tools to recuperate; seeking sanctuary in the company of friends, who are also unprotected from feeling wrecked; mending on an empty stomach; experiencing life as if you’re watching it from behind a shoulder-high wall—ducking when it’s too much, peering over to discover more, both wise to and oblivious of everything out of view, rashly tossing your effects over the ledge and starting over with nothing. The illusion of nothing, that is. There’s no suitable language for feeling adrift when on paper you seem all right. Arguing with yourself into becoming someone else is next to impossible. And then the world disappoints. And no amount of interpretative power could have prepared you.

Perhaps I’m still too young to have ideas occur to me. Perhaps I learn and then forget. I’ve Googled many times what poison ivy looks like and I still can’t identify it. Perhaps I’m still unready to conceive of a life entirely my own because I’m preoccupied with the quality of blue in pictures of my parents before I was born. At twenty-nine—that cusp, almost craning, turgid age—I so badly miss hearing, of all things, my father fill the dishwasher, precisely, just as he’s always done. Or how he still yells into the phone when he’s speaking long- distance, to an uncle in India. How expressions of deep love in Bengali somehow boom throughout the house like disagreements might in English.

And what about life’s near-invisible blips: those private ones like an email from my mother at 9:04 on a Thursday morning. “Just saying hi,” she writes. I know she sent it from her computer, in her study, sitting at her desk of papers where, I imagine, in order to press the enter key, she has to brush aside the corner of a loose page— maybe her class schedule or minutes from a meeting. My mother’s papers are overgrown. A jungle. My mother’s Just saying hi is meant and sent with every atom of her mother brain, body, heart. She misses me. A mother’s lowercase hi is catastrophic. It’s the apple grabbed from the bottom of a pyramid display. I hadn’t meant to be hungover on a Thursday morning, and yet. The culpability that accompanies daughterhood—while it might fade over the years—never fully lets up. I’d estimate even, it reestablishes itself. A whole planet of worry that’s working in collusion with that part of my gut trained to fear the absolute worst when someone leaves a voicemail or when a friend texts “K.”

When I search the word miserable in my inbox, most of the results are from friends who’ve had colds. Who were writing to say, “I can’t make it to night.” Miserable, in these cases, connotes the purely physical. A runny nose and fever, a sinus infection. The morning after a bad bout of food poisoning. Miserable meaning a weakened state.

Then of course there is the quality of being a deplorable person. It comes up in my inbox with regards to men. Miserable men. In one email, I mention to a male friend how a movie I’d recently seen is centered on miserable men. I go on to complain that there aren’t enough movies about miserable women, but I’m careful to distinguish how miserable women are fundamentally different from unlikable women. In the email I sound superior, as if I’m trying to impress this male friend, who I’ve now come to realize is perhaps one of the most miserable men I’ve ever met. I’ve since decided that miserable men, unlike miserable women, are, in fact, unlikable too.

In 2009, one friend uses miserable while Gchatting with me. It’s a Monday and she’s recapping her Friday night. My friend describes how she spent the night overcome with jealousy, having thought she saw her girlfriend flirting with another woman. My friend tells me how she felt “miserable and then crazy for feeling miserable.” This, I’ve decided, is an excellent use of the word. Feeling miserable is, by nature, a spiraling condition. Almost antigravity despite its Eeyore gloom. It’s a looping state with that touch of screwball. Miserable, I’ve decided, might be the most good-humored way to characterize being in a bad mood.

My father, however, uses the word miserable differently than anyone else. In an email from long ago, he worries, for instance, that my brother is making a “miserable salary.” Or that the bathroom in the apartment I’ve applied to live in is “just miserable.” When he writes, It’s your decision, he means, What are you thinking?

In 2012, he keeps me informed about my mother’s sister’s cancer treatment. The chemo she’s undergoing leaves her feeling, he says, miserable. When your mother’s big sister feels miserable—the aunt who’s made and custom-decorated all the birthday cakes for all the cousins, dyeing shredded coconut and piping buttercream roses—there’s really nothing to be felt, because your entire body becomes a wound. In the hospital, in bed, not wearing eyeliner or her glasses, she probably looked lost.

It’s clear to me when my father says miserable, he means it in a way that makes me wonder if I learned it, all those years ago when I was buckled into my OshKosh overalls, from him. If you’ve ever had a sad parent, then you’ve grown up learning how to perceive sadness when it’s being expertly concealed from you. When it occurs merely in how someone needs to conjure spare strength for basic tasks like pushing his arm through his winter coat sleeve or needing to sit at a slight remove from those other parents huddled close on the park’s bleachers during a match. You’ve not so much witnessed sadness but sleuthed it. You’ve absorbed it, and, without understanding what it is, you might even mimic it. You’ve acquired a capacity for providing conciliatory silence. So silent even that one day on the way to work, my father, who every day dropped me off at day care before heading to the office, completely forgot I was sitting in the backseat. When he pulled into his parking spot and turned off the car, I said, “Baba, no day care today?”

The other day I was FaceTiming with my father and stepmother. I can’t be sure what we were talking about, but it was evening and I was sensing, more so than usual, the current of daughterhood. It sneaks up on me when I can spot in the background, perimetered by my screen, their umbrella tree, for instance, and how it reinvents them, outside of me. Living their routines, watering their plants, going about their days. The phone will ring at theirs and it’s Ray. Who is Ray?

After we did some catching up, I could tell my parents were about to turn on the television and watch the news, so I said—though it wasn’t true—that I was meeting a friend. I pushed my face closer to the screen and waved like a maniac to suppress those tears that aren’t tears, exactly, but a warming of my face, because my body reacts disobligingly, and confounds goodbye with just bye. Though I’d hoped to say, in jest, in some wimpy grown-daughter way, how this evening I was feeling vaguely miz-uh-rull, the call was already over. They’d pressed end, and the rude slight of my face was reflected back to me. How is it that coming upon one’s likeness, my own face, can feel like an unsolicited affront? Vulgar. A harsh blow, not just to my vanity but also to my personhood. My screen-lit contours—somehow soupy—and the blunt quiet in my apartment were, momentarily, impassable. Those seconds that followed the call were a miz-uh-rull of seconds. A reminder of how damning too late can feel.