A Space to Be Filled

“My soul struggles and pushes against the idea that a woman's memoir has to be useful, or that I should be any kind of model for living.”

CLAIRE DEDERER: The book reads like a memoir in that it really hangs together, it’s unified. But it is a book of essays. Why did you chose the essay form, and what did the essay do for you?

KRISTI COULTER: That’s a good question. I find it interesting to write in short chunks. I didn’t really want to write a book that began, “I was born on this day, and then . . . ” Just thinking about writing it bored me. And if I’m bored, you’re going to be bored. I liked the idea of giving everything its proper length and its proper shape. It also allowed me to play with some forms in the book, like advice. There’s also a letter, and there’s a quiz. I love that kind of thing. It was a way to distract myself from the fact that writing is hard work.

CD: Were you pushing back at the typical sobriety memoir?

KC: I was in some ways. I’ve noticed that your typical recovery memoir, even my favorites, tend to be more about the drinking. It’s like, “I hit bottom” — often it’s a very dramatic bottom — and then it’s like, “and then, I got sober, and everything’s great!” When Blackout by Sarah Hepola came out, I read it and I loved that she spent about as much time on her sober years [as her drinking years]. I was newly sober at the time. Later I heard her say in an interview that many readers, “I didn’t like that part. It was boring.” But I loved it. I wanted to write as much about sobriety as about drinking. My drinking is not that interesting. It was really boring to me by the end.

I wanted the book to be funny, because I think sobriety is funny. I think that most things are funny. I wanted it to be serious, but not earnest. I was really scared of being sober for a long time because I assumed it would mean that I would have to become very pious or very earnest. And then I got sober and I was like, well, nope, I’m the same person. I wanted to write a book to show people that you can still be a jackass when you’re sober; it’s not like you’re joining a cult. You still have to work on becoming a better person.

KC: When my editor and I were first talking about this book, I would say, “I’m not out to help anyone!” What I meant was that I didn’t want to write a self-help book. I didn’t want to write a book giving people advice. I wanted to tell my story in my idiosyncratic way. That’s another thing — I think that many recovery books fall into certain patterns of language, patterns of behavior. And some of them ring true to me, and some of them don’t. I wanted to write my story, and if it helps people, that’s great. But, no, I don’t think that any book is obligated to be useful.

CD: I think that women’s personal writing and personal memoir tends to be read as prescriptive, as if you’re telling the reader how to live.

KC: That happened with your book.

CD: That happened with my book, but also with Liz Gilbert and Cheryl Strayed. They get treated not as authors, but as gurus. And men’s memoir tends to be read as pure description, which is to say literature.

“I am not a model for how to live. I did one thing that I've done pretty well, and I'm pretty proud of that. Well, I've done more than one thing well, but I wouldn't want to presume to tell anyone else how to live their life.”

CD: Have you encountered that?

KC: I’ve had people call me a little tongue-in-cheek, but not their guru. That really freaks me out; I am not a model for how to live. I did one thing that I’ve done pretty well, and I’m pretty proud of that. Well, I’ve done more than one thing well, but I wouldn’t want to presume to tell anyone else how to live their life. It’s more like, this is how I did it, and by the way, here’s a bunch of other really messed-up things I’ve done along the way. But yeah, my soul struggles and pushes against the idea that a woman’s memoir has to be useful, or that I should be any kind of model for living.

CD: It doesn’t matter how you feel about it, because it will be received that way nonetheless. Okay, I’ll ask the question everybody wants to ask, so we’ll just get it done and move on. Your husband John is a big character in this book. I’m kind of interested in how you navigated that with him, but I’m more interested in how you navigated that with yourself, as a writer.

KC: It was so easy, honestly. John is the only person I asked for any kind of permission. I did the legal stuff and anonymized people. But I couldn’t really make him anonymous; I mean, he lives in my house. And so I just said, “If there’s anything you’re uncomfortable about” — because there’s a lot of things about our marriage, and about him, and his own drinking — “I’ll take it out.” Fortunately, he was on board. But at the same time, I tried to write it in a way that — I mean, I wanted to do well by him. I love him and I’ve known him for a very long time. He’s a great character.

KC: It was. It was one of the last things I wrote about. When my essay “Enjoli” went viral, some readers said, “You know, I had a hard time relating to this because it feels like you’re really privileged and you’re not acknowledging that.” Or, “This would be really different if you were a woman of color. Your drinking wouldn’t seem so cute or so fashionable.” I thought that was all really interesting feedback. I decided pretty late into writing the book to deal with that directly. There’s a chapter called “Elephant Gray,” which is the color of a very expensive bag I bought on impulse to celebrate my sixtieth day of sobriety. I worked at a local tech company for many years, and I made a lot of money there — the kind of money I never expected to make. That money made it easier to get sober in some ways: I had access to therapy, I had a job where my schedule could be flexible if I needed it to be. But it also allowed me to keep lying to myself for much longer. I thought a lot about how money and how it helped and didn’t help me to get sober. I wanted to acknowledge that I was writing from the point of view of someone who is in the one-percent, someone who made a crazy amount of money and also paid a price for it.

CD: If you’re writing as a woman, our spending looks different from male spending. It’s another opportunity for personal writing by women to get treated unseriously. But these issues are really serious.

KC: I was like, “Oh, it had to be a handbag . . . “ But that’s what I buy! I just like them. You have to carry your stuff around in something! At the same time, I do think there’s that risk of losing readers who can’t relate to you at all because you have money. But it’s interesting how, once you stop drinking and start talking to other ex-drinkers, the money does not matter. You cut through all that stuff so much, you’re just talking.

CD: You write about this idea of this hole that’s inside us, and while it doesn’t really get filled, you begin to think about it in a different way. What did you say the hole becomes?

KC: I was talking with someone the other day who asked, “Has that space gotten filled? Are you satisfied?” And I was like, “No, I’m not. Of course not. Are you?” I think it’s human to want. I had this idea that, getting sober, I would be in a Zen-like state of contentment — which would be nice. I mean, it sounds pretty nice, doesn’t it? But it doesn’t happen. I think that, if anything, I’m more in touch with my own desires now. Of course, I’d love for that space to get filled. But I don’t think it’s going to be not drinking that fills it.

CD: It’s part of what makes you a writer. 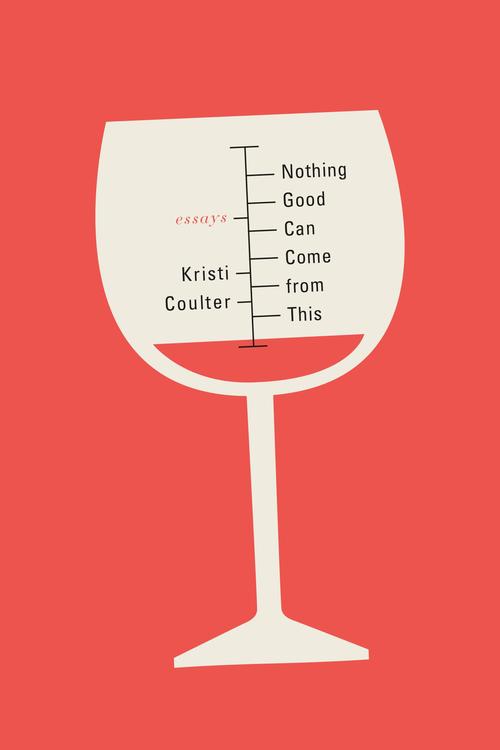 Nothing Good Can Come from This

Kristi Coulter inspired and incensed the internet when she wrote about what happened when she stopped drinking. Nothing Good Can Come from This is her debut--a frank, funny, and feminist essay collection by a keen-eyed observer no longer numbed into complacency.

When Kristi stopped drinking, she started noticing things. Like when you give up a debilitating habit, it leaves a space, one that can’t easily be filled by mocktails or ice cream or sex or crafting. And when you cancel Rosé Season for...