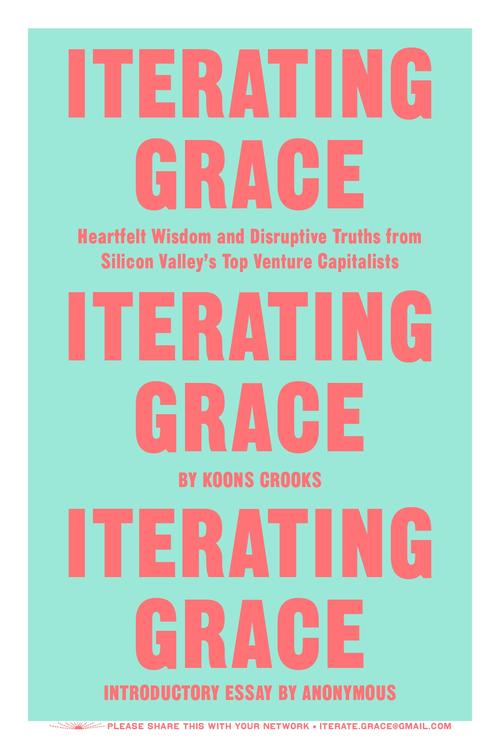 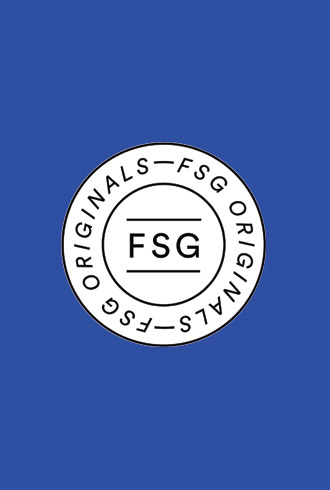 What is this tiny book? Who is this Koons Crooks?

With its privately-printed, anonymously-produced 140-copy first printing, Iterating Grace became the talk of summer 2015 in the tech world. From Buzzfeed to Tumblr to Fusion, people were puzzled and enthralled by the story of Koons Crooks, a young man who took the Twittered musings of the Silicon Valley elite to heart-and ended up on a profoundly unexpected path, leaving behind only the lovingly hand-calligraphed tweets that had meant so much to him. His story struck an immediate chord.

There were competing efforts to identify the author of Iterating Grace; blog posts and lengthy comment threads pointed finger at writers all over the country, from Robin Sloan to Susan Orlean to Dave Eggers. Other early theories supposed it was the tip of an elaborate marketing scheme, and soon all would be revealed. But gradually it became clear that it was simply this: a small piece of literary art, perfectly pitched and driven by a Twain-like bemused outrage, by a creator who did not want to be identified, and would not explain anything beyond what the satirical fable said for itself.

An excerpt from Iterating Grace

UP THE MOUNTAIN, DEEP INSIDE:

THE ECSTATIC EXPLORATIONS OF KOONS CROOKS

You don’t need to know my name. What’s important is that I recently got a phone call from a young man outside Florence named Luca Albanese. (That’s not his name, either.) Luca and I hadn’t communicated in ten or eleven years; he had lived with my family in Houston as an exchange student during high school. On the phone, he told me that he’d just finished veterinary school—a poignant swerve, it seemed, from his father’s expectation that he take over the family butcher shop—but it was immediately clear that he had no interest in small talk. He’d had an extraordinary experience, he said, and was in possession of “some unusual materials” that he thought I should see.

Luca and his brother had been trekking around South America and, while mountain biking on a Bolivian volcano called Uturuncu, discovered a dead body: an apparent hermit, lying outside a yurt. The scene and circumstances were peculiar—we’ll get to that—but what first struck them was that the man was clearly not a local. He was white, relatively young, and completely naked, though there were some clothes folded neatly beside him: a pair of neoprene cargo pants and a tattered fleece vest that said “Pixelon” on the left breast. There wasn’t much in the yurt, but Luca furtively gathered some books and papers before descending and alerting the authorities. His mediocre English kept him from deciphering what he’d found and comprehending this man’s story fully, but he’d gleaned enough to decide that because I teach poetry writing and live in San Francisco, I was—at least in Luca’s mind— the obvious person to put on the case.

Luca’s package arrived a week later. Here is what I learned.

Koons Crooks was an inexhaustible foot soldier of the first dot-com boom, working steadily as a programmer at a string of forgotten start-ups in the late nineties: Naka, InfoSmudge, BITKIT, Popcairn. He was tall and muscular, with a square jaw, an olive complexion, and thick, wavy hair just long enough to tie back in a ponytail—and yet, several friends told me, he still always managed to look distressingly unhealthy. He was, as one acquaintance put it, “fully post-meal,” inserting pieces of food into his mouth at regular intervals while he worked. A coworker remembered Crooks moving through an entire bag of frozen shrimp gyoza in a single morning, raising and lowering his left hand hypnotically and gumming each dumpling until it softened enough to be chewed and digested. Occasionally, he could be heard saying, very quietly, a single word: “Yum.”

People called him Pepper, a nickname he carried from company to company until no one could remember exactly how it had originated. (One programmer told me, “I always thought it was, like, ‘This guy spices things up!’ ”) He had few real friends but was close with his Bernese mountain dog, Smoot, at whom he was known to shout commands in Unix.

When the bubble burst, Crooks left Smoot with an uncle in Danville and started driving around the West by himself, visiting national parks and Waffle Houses. It was a period of intense reflection. Gradually, he seemed to work up a metaphysical perspective on the dot-com collapse. In an email to a former coworker, he wrote:

Another friend remembered Crooks calling in the middle of the night from a Waffle House near Denver, in early 2003, to share his ecstatic realization that, as he put it, the dot-com economy had been “one big mandala,” referring to the Tibetan Buddhist tradition of creating art out of sand and then wiping the artwork away.

In Silicon Valley, so many people had collaborated to create so much, only to watch it crumble and wonder how real it had ever been. For a lot of tech workers, this only led to despondency and debt. But Crooks seemed to find the dot-com economy’s impermanence electrifying. Start-ups, he realized, were a kind of spiritual exercise. He wanted to live that experience again, but in its purest possible form. He wanted “to touch THE ESSENCE without gloves,” as he put it in the summer of 2003, in an email to his uncle.

After that, he disappeared.