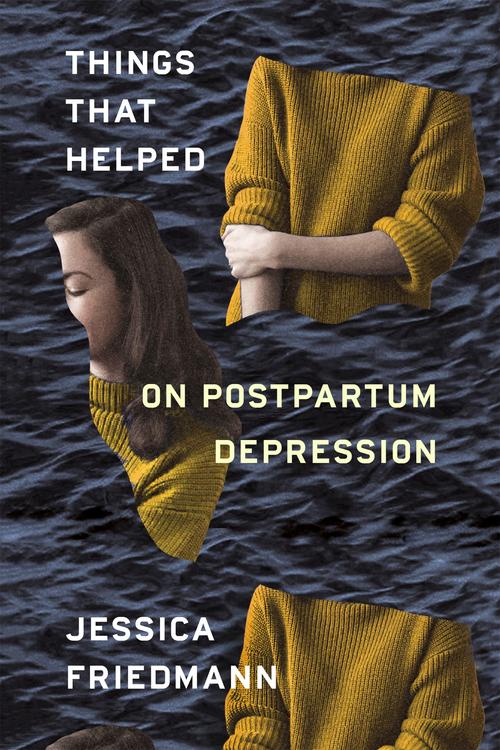 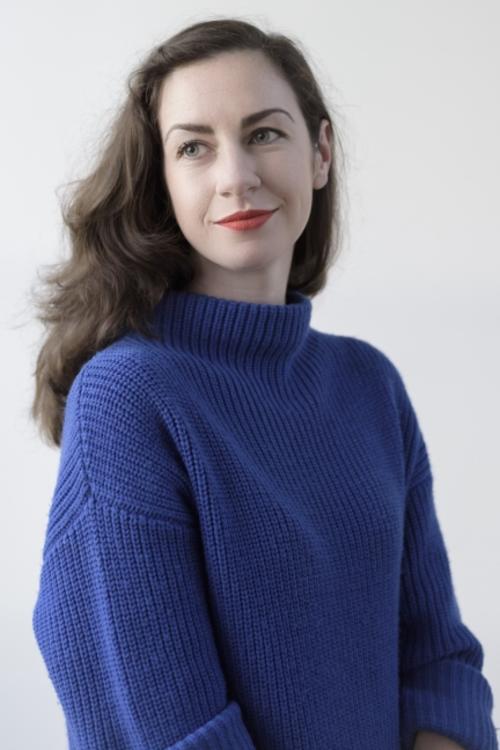 Things That Helped is a memoir in essays, detailing the Australian writer Jessica Friedmann’s recovery from postpartum depression. In each essay she focuses on a separate totemic object—from pho to red lips to the trans musician Anohni—to tell a story that is both deeply personal and culturally resonant. Drawing on critical theory, popular culture, and her own experience, Friedmann’s wide-ranging essays touch on class, race, gender, and sexuality, as well as motherhood, creativity, and mental illness. Occasionally confrontational, but always powerfully moving and beautifully observed, Things That Helped charts her return into the world: a slow and complex process of reassembling what depression fractured, and sometimes broke.

An excerpt from Things That Helped

In the beginning there was the river, wending its way around the top of the suburb, then snaking out protectively towards the south. The water was deep and cold and full of silt, and in the months after I had my baby I would often dream of going down to drown myself in it.

At dusk the river’s parklands were beginning to empty out, the cyclists and joggers wary of the cold and the settling night. Old men who squatted on their heels reeled their fishing lines in, carrying their lures home in scrubbed-out paint buckets. Soon it would be dark; soon a cloistering silence would descend on the leaves and grass, broken only by the rustle of the wind and the steady drone of the highway, as persistent as seawater or the beat of a heart.

I thought of the water as I listened out for the baby’s breath, in and out, lightly broken, sometimes, by a hiccup or a snore. We had made the walk to the river’s banks a hundred times over the summer, Mike sometimes breaking off for a run while I saw how many native grasses I could name. Now, in the deep of winter, it ran through my thoughts nightly, bringing a cool little rush with it, a rush of relief. We kept the heating on at home, trying to fend off the drizzle and damp, and ran it through the night “for the baby’s sake,” though in truth he seemed alright—a hot little furnace running hotter in his sleep.

Through the tide of hormones surging within my body, and the little runnels of blood, and the sour tang of my breasts, I lay awake, listening, and thinking of breath and of water. I had broken my relationship with sleep; it was no longer safe. If I did drift off, the baby’s shrills of noise let down my milk and sent a hot flush of sweat through my body before my brain had a chance to catch up, and I would wake sticky and panicked, and sure that something was wrong. The sickening wrench of waking was awful, so I lay in bed playing possum; it was better to be passive, to let the baby suckle me without protest and then settle him down to fall asleep again, his small fists raised above his head. I lay awake and listened to the quality of the silence change.

When I was sure the house was asleep again I rolled to the side of the bed, gently, so as not to aggravate the incision site, and manoeuvred myself up. It was the same move my midwife had taught me, a kind of slow roll-and-rise that made up for the lack of a core. The rest of the house was dead at night, the only centre of breath our stale, faecal bedroom, where the heat coalesced and cushioned us into a relentlessly interrupted stupor. Outside the door, which

I gently closed, the air was fresh and cool.

The floorboards sent chills upward as I shuffled down the hall. Through the living room, our paintings and books veiled in shadow; past the dining table, smothered in vases of congratulatory flowers. The tiles of the bathroom floor felt like ice against my skin, and I stripped off my t-shirt, soaked with the night’s flushes of sweat, and pressed my bare back more firmly against them.

Here, in the quiet, there was only my breath and the rustle of leaves outside. The nauseating heat of my skin, the clamminess of it, found its counterpoint; my breath sounds were the noises of one person, not three. In the cold and calm I lay on my back and thought about the river.

It wasn’t hard to draw its coolness around me, its chill. The fog of sleeplessness cohered into a single vision: I would walk out of the house, and cross the highway, leaving no sign behind me. Down the steep hill that led to the river’s banks, my hands would reach out for leaves and flowers, touching all the glossy, dew-specked marks of winter growth. Then I would slip out of my clothes, fold them neatly, and disappear beneath the surface of the water.

In a few hours the sun would come up, glinting off the mineral bits of rocks, and discarded fits, and discarded fishhooks. The oars of boats would shatter the river’s surface into a million green-brown sequins, and the new day of its life would begin. The flowers would open to the sun, starved for light. And Mike would wake, and know that I was gone.

He would grieve; I knew he would grieve, but he would be anchored to the earth by this tiny mewling child I felt no stirring of warmth for. He would find love again, because he was easy to love, and another woman would blossom towards our baby and reveal herself to be the real, true mother—the mother our baby would need.

In the cold rush of water my flesh would loosen, become swollen. My engorged breasts would leak a trail of warm milk into the river, the healing wound below my waist be riven in two again, the stitches dissolved. My hair would wash out like weeds, and my eyes would not turn into pearls, but be perpetually turned to the sky.

I knew that it would not be gentle, that it would be violent and raw, but in the midst of the water filling my burning lungs, and the quick blacking out of vision, I would move sideways, catch myself right before death, exist as the slow play of light on the water and the soft rain spattering my growing child when he came to explore the park. In this way I could keep him forever, watching from the reeds.

In the bathroom, collapsed between clusters of night feeds, the vision was compelling. I would wait, and then

I would rise again, this time with purpose, and walk out to greet the night, and walk down the quiet hill, leave my body behind, and gently disappear.

I wanted to do it; I was resolved, I had made up my mind. The only problem was that I couldn’t get up off the floor. 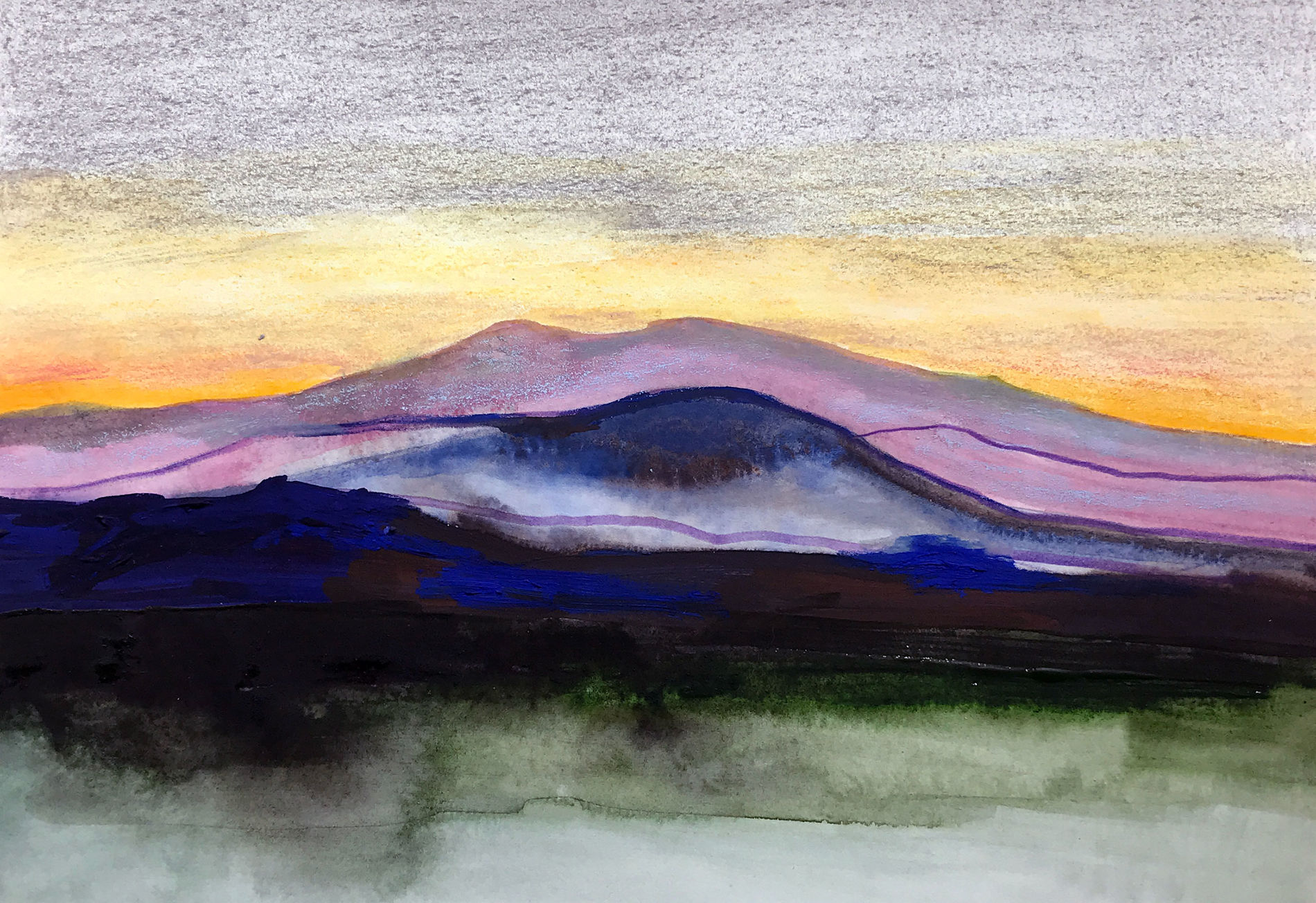